at the BIRTH HOUSE of POPE BENEDIKT, Maktl, Germany

"ART LOOKS FOR IT'S PLACE"  THE NEUMANN COLLECTION

Exhibition at the Museum in Goch, Germany

The hare in the works of George Ettl

George Ettl was inspired by the animal kingdom very early on in his career.  His first works showing the logo-like animal silhouettes appeared in the mid 70's. At the time Ettl limited himself to the silhouettes of horses, flamingos and marabus, which appeared repeatedly in his work over the years.

It was not until 1992,  when redesigning the interior of the Heilig geist Church in Neuss, Germany, that Ettl created further animal silhouettes and painted them on the walls of the church in large numbers as part of the different bible stories.

The hare appeared for the first time in 1996 on the right side wall of the church as one of the animal pairs entering Noah's Ark.

In 2001 the hare reappeared in Ettl's large plywood sculptures in the scenes of "Noah's Ark", "The Farm" and "Paradise".

On Ettl's edition of printed table cloths from 2002 the hare is once again present entering Noah's Ark.

In the same year, Ettl's hare could be rediscovered in form of a bigger than life steel sculpture.

As part of the state garden show at the castle of Dyck in Jüchen, Germany in 2002, Ettl was commissioned to design a group of sculptures for a garden area at the castle. The hare was one of the five figures Ettl created and  installed in the foreseen garden area.

Ultimately, the hare can be found in Ettl's well-known editions of plywood figures labeled "Atelier Ettl". At first in 2003 in the small version of "Paradise" with Adam and Eve and side by side with a cheetah. And finally, at the request of a friend of Ettl, as the single hare, which became a very popular unlimited  "Atelier Ettl" edition, still available to this day.

On the occasion of Easter and to commemorate George Ettl's birthday, Atelier Ettl is launching another version of the Ettl Hare. This time as a polished brass figure measuring 4.7" x 3.1" x 1.4 ". The edition is limited to 75 hares.

Each hare of the edition numbered and marked with the Atelier Ettl logo. They come in a customised box, with a choice of a pink, black or gold hare embellished on it's lid.

George Ettl would have been 82 years old on March, 31st, 2022. Atelier Ettl is keeping his work alive.

On the occasion of the 40th anniversary of the Städtische Galerie im Park in Viersen, this exhibition looks back on the works of George Ettl. The artist spent most of his life in Viersen leaving lasting traces of his art in his chosen hometown throughout 40 years.

Male angel and female angel without sword after the image of  George Ettl. Photos: Rebecca Oher

The sculptures are intended to rust.

The original work by George Ettl is a 9,8' tall steel sculpture that is privately owned in Viersen, Germany. Its surface is entirely rusted by now.

"Art is ephemeral" Ettl said and therefor left the bigger part of his public steel sculptures untreated, so to expose the to the natural process of rusting.

Georg Ettl’s first work, that became known as “The Strong Woman”, is a 7.30-meter-high steel sculpture created in 2005 and erected in the square of the Viersen County Building. Additionally, three smaller versions of “The Strong Woman” were created. All three of these works are in private collections.

The original title of this sculpture was "Woman with Arma". Over time and by its own, this changed to its current name which is now well established.

After the artist’s death in 2014, a third draft of the sculpture was discovered intended to be made in plywood this time and become a part of Ettl’s well known series of plywood figures labeled “Atelier Ettl.

The draft of this figure was already digitalized ready for production. Due to Ettls serious illness however, the artist wasn’t able to  follow up on the realization of project.

Atelier Ettl now completed his intentions in the framework of a fundraising project together with Zonta Club Viersen Area.

“The Strong Woman”, lasered out of plywood and glazed orange supporting the campaign against violence toward women and “Orange your City”, was created in a limited series of 150 pieces exclusive for the Zonta Club Viersen Area. The proceeds from the sale of the special edition will benefit this campaign for  Women in Need. Envisioned is the support of female artists who, due to the the Corona Virus Pandemic, are existentially in need.

The figures are currently sold out.

Vernissage "The House in the Works of Georg Ettl"

Vernissage "The House in the Works of George Ettl

"Simple Pictures of a Clear World". Thus begins the text of Julian Heynen in the catalogue "Georg Ettl" on the exhibition in the Kaiser Wilhelm Museum Krefeld, from April 17th to Mai 29th, 1983. Nearly 36 years later and 4 years after the death of Georg Ettl, the Villa V is showing the artists works from his different creative phases on the topic "House".

"Our ideas about the house are disordered; many things come together. In the Grimm's Dictionary it has the "most common sense of means to retrieve, a shelter".... Georg Ettl plays on all this with his house pictures"

Right: the sculpture after the design of Georg Ettl is a memorial in memory of the victims of the National Socialist Military Justice

Not far from a burial ground in the main cemetery commemorating the victims of forced labor, a steel horse towers into the sky. It is a memorial to the victims of Nazi judiciary.

Legions of equestrian statues stand in cities and squares around the world. They are heroic, conspicuous and all too often unreflective reminders of fought battles and memorable leaders. On Saturday, a special kind of "equestrian statue" was presented to the public in a festive and emotional ceremony in front of a large audience. It stands in the city's main cemetery - an equestrian statue without a rider and a solid base. A memorial created according to the design by the artist Georg Ettl.

Mayor Hans Wilhelm Reiners thanked the architect Professor Heinz Döhmen (1927-2019)  for the monument, his gift to the city of Mönchengladbach. This memorial, Reiners explained, was dedicated to the victims of Nazi military justice, a judiciary that prosecuted those who resisted the madness of war. The memorial intends to raise awareness to this group of victims that counts citizens of Mönchengladbach among them. He widened the range of commemorations from the victims of the Second World War to the refugees of our time. The memorial is a symbolic rehabilitation of the Nazi victims whose convictions were only legally overturned 15 years ago - an unbelievable idea. Reiners expressed the hope that the Ettl memorial could spark a discussion about the victims and what they mean to us today.  He wishes for schoolchildren to visit this new aspect added to the culture of remembrance in Mönchengladbach.

Not far from the burial ground in the main cemetery a steel horse towers high into the sky in memory of 90 killed forced laborers. The riderless, reddish, flat horse  seems to flee over the treetops towards the exit. The horse is made in Ettl's typical style: very minimalist, reduced to essential features. Below him a golden, vegetal capital and far below him on the floor: a heap of stones as a special form of the base. In front them a plate with words by Bertolt Brecht from the "German War Primer": "So we put him against the wall, a human being like us, a mother's son. To kill him and so that the world would know, we made a picture afterwards."

In a moving speech, Heinz Döhmen recalled his own experiences in the war, the injustice he had suffered. he spoke about his flight and the constant fear of being found and arrested. He didn't experience his own condemnation, but that of his school director, the chaplain, and friends. He experienced the fire in the synagogue in Mönchengladbach. According to Döhmen, his past finds meaning in doing what he can to remind people of the injustice. To him the horse is also a symbol for the animals slaughtered in senseless wars, and the heap of stones is reminiscent of the grave for the evil spirit of the judges of the National Socialist era.

The sculpture was made according to the design by his friend, the artist Georg Ettl, who died in 2014 . Ettl was regarded both as an artist from Mönchengladbach (he was one of the first to move into a studio in the Steinmetzstraße artist's house) and as an artist from Viersen, where he worked and lived for 40 years and left clear traces of his art in the form of sculptures and murals in both cities.

"Jiri Svestka Gallery, a small gallery hidden on the 3rd floor in front of the Blain|Southern Gallery, is a fine gem. Since the 16th of September in the context of the Berlin Art Week, they opened their doors to the exhibition of Georg Ettl, a German artist born on 1940 who migrated to the US to return during the ’70 and whose artwork is very difficult to categorize due to his versatility.

Every time I have visited any of Jiri Svestka Gallery exhibitions I have been positively surprised. That is why, when I am around the area I go for a peak and treat myself with an art surprise. This time, despite the promotion picture of Georg Ettl’s work not being very promising, I still decided to give it a try.

The surprise was major. I was expecting a whole bunch of uninteresting looking cement blocks, but on the contrary, I found in front of me the graceful works of Georg Ettl, forming a harmonious contrast in the shape of an exhibition; almost like the feeling of having a exquisitily prepared dish with a delicious umami taste that it involved all of my senses.

It was cold but warm, hard but soft, achromatic but colorful, ephemeral but enduring, uniform but contrasted, fragile but indestructible and opaque but translucent.

It felt like it was talking about life itself.

I invite you to visit this exhibition and experience yourself the rollercoaster of contrasts and the subtlety of the works. It’s a good way to awaken your senses in these grey days of autumn." 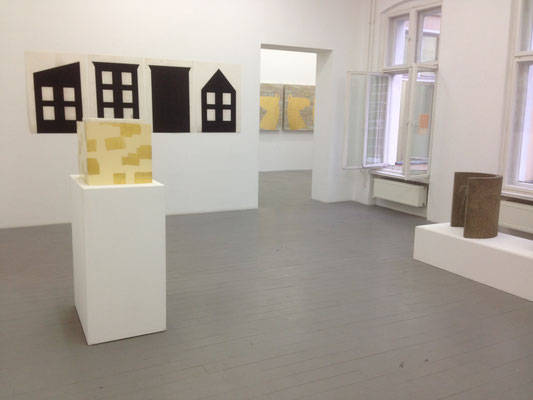 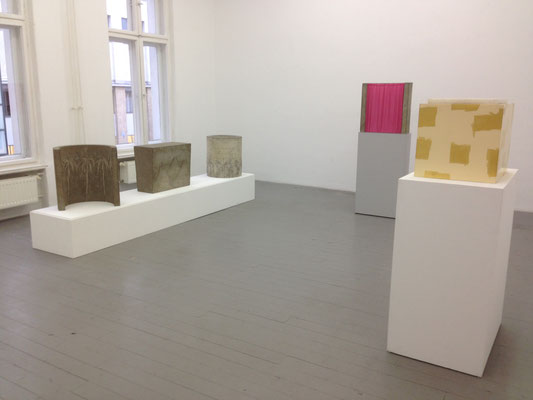 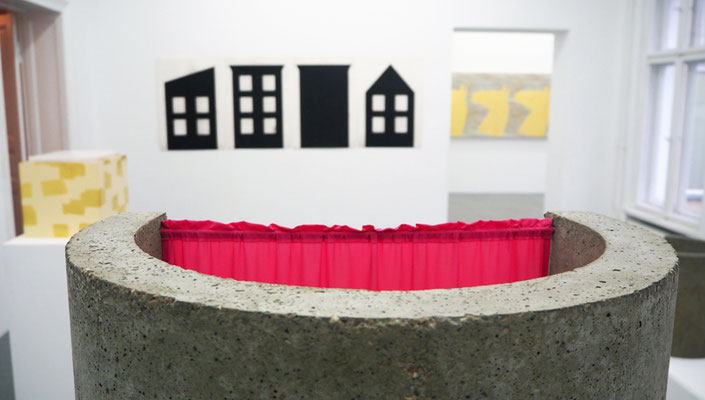 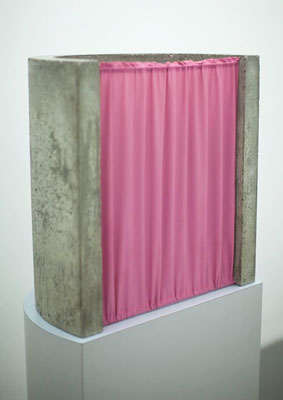 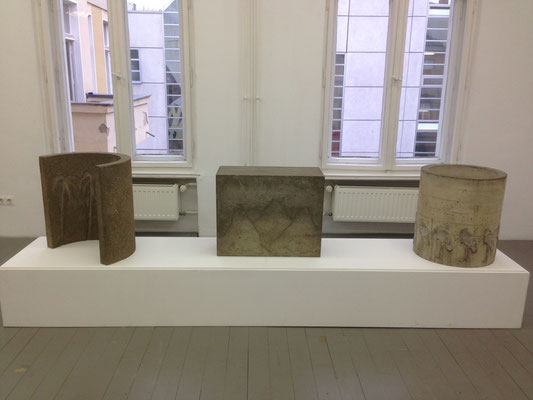 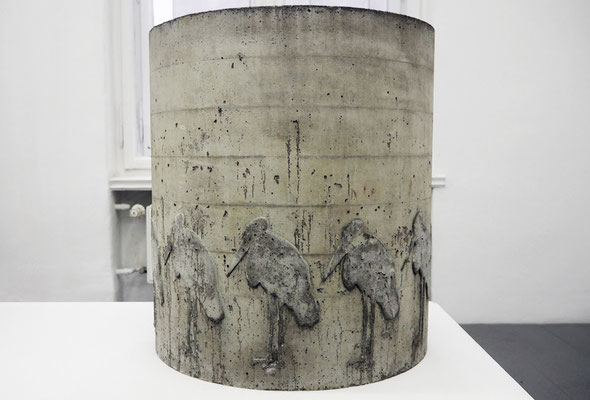 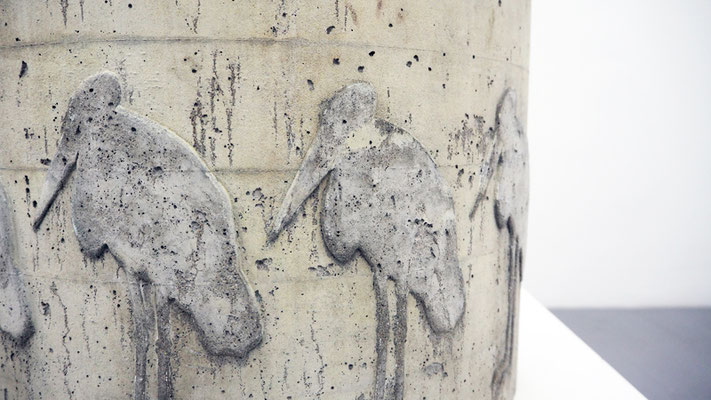 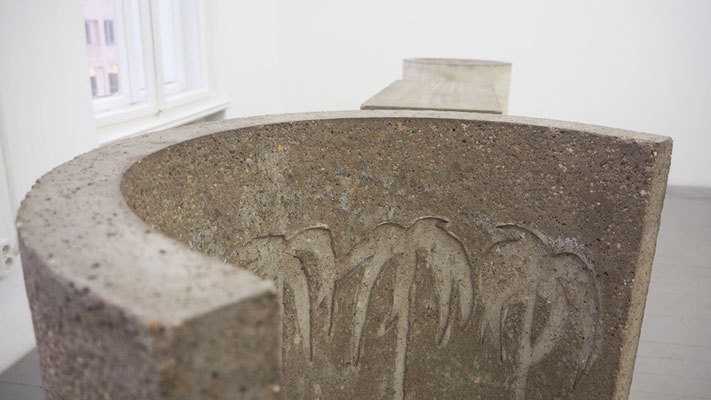 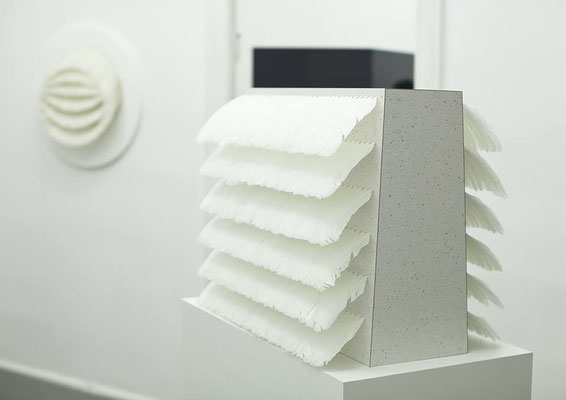 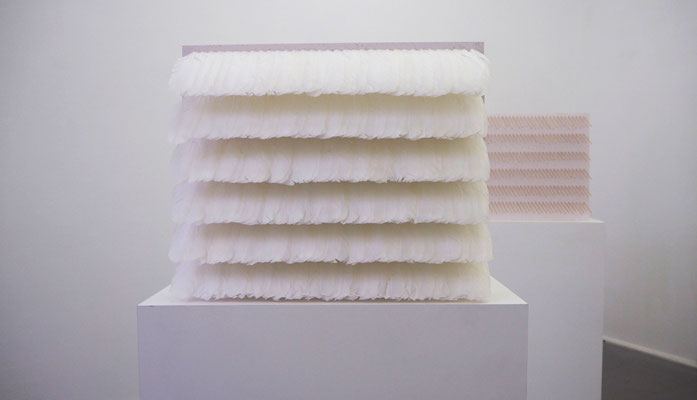 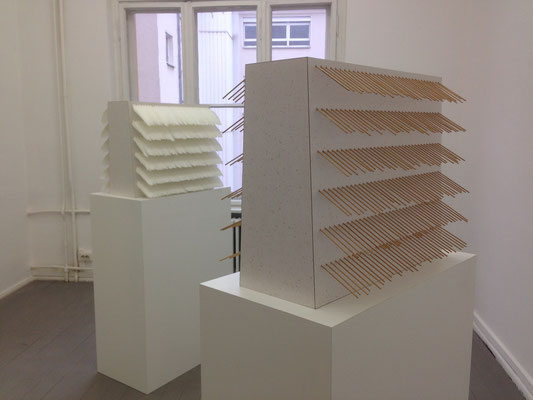 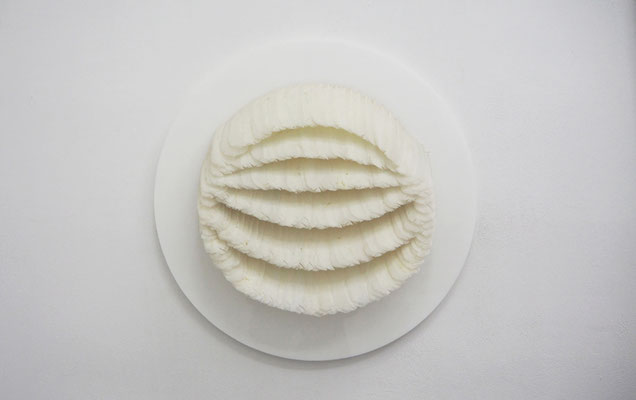 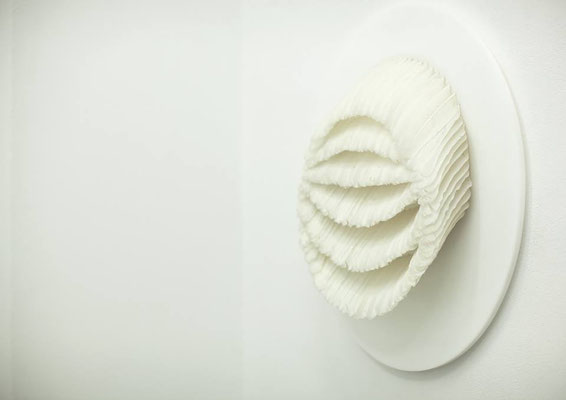 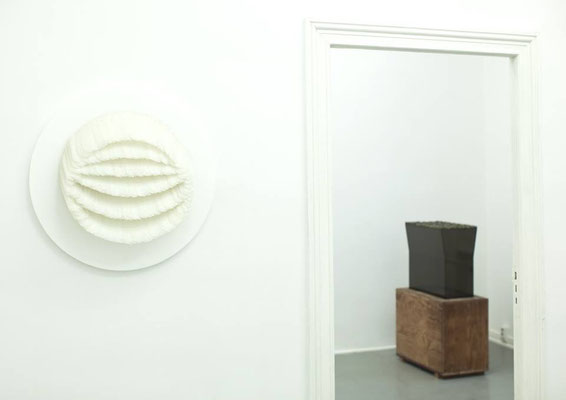 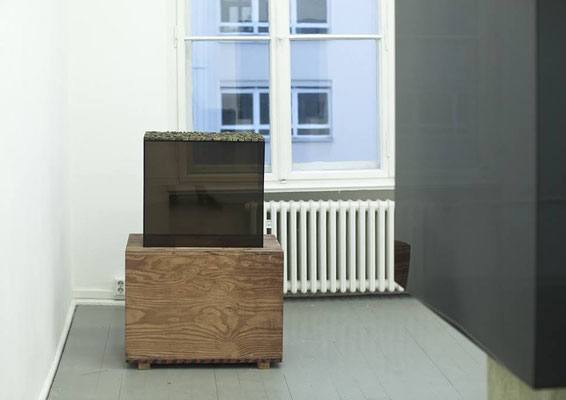 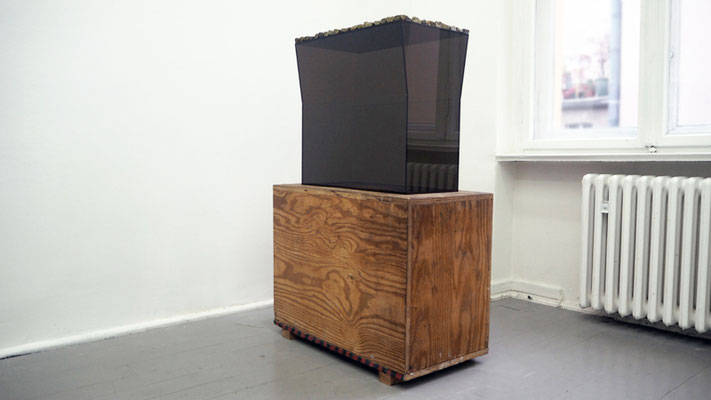 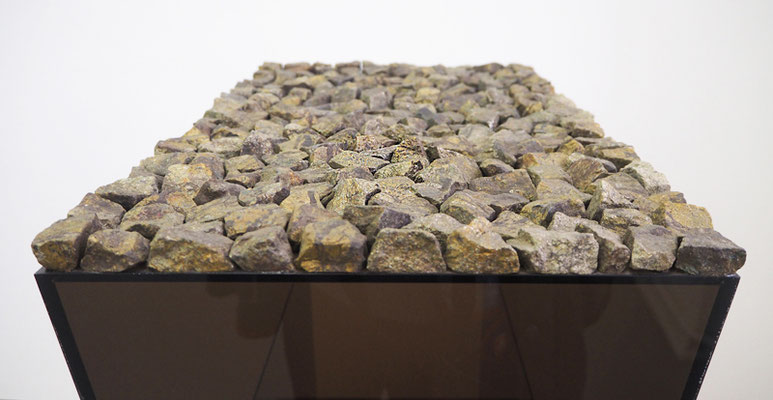 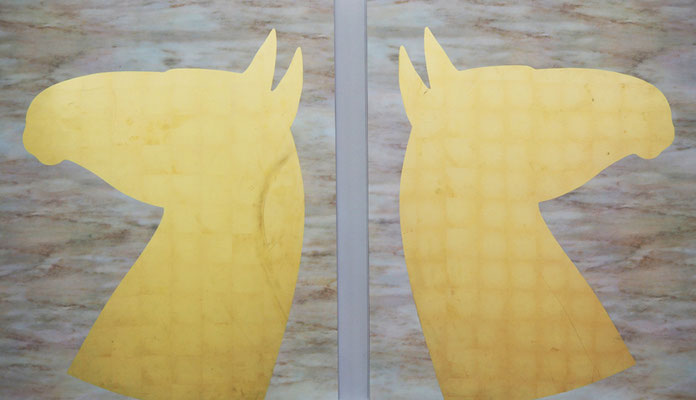 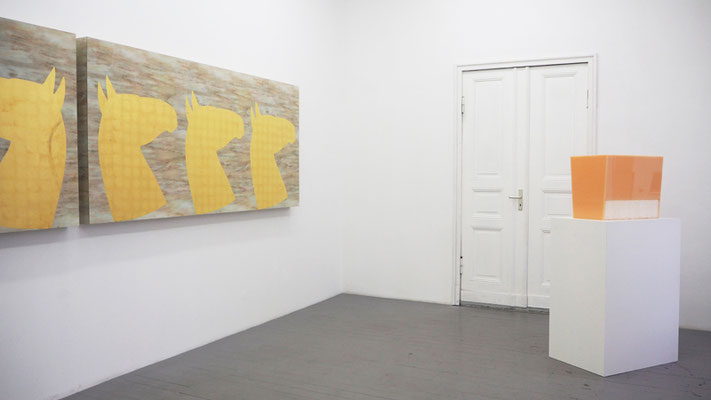 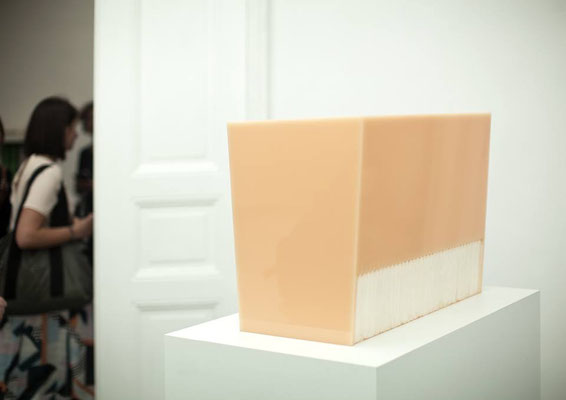